You either have one already, you are going to have one soon. Robot pets are taking to consumer markets worldwide in the shapes of baby seals, dog puppies, or a tail-wagging cushion. Now they are getting company by an overrun cat.

flatcat has been titled “the creepiest robot ever seen” by Gizmodo and that may indeed be so for some. For many others, it is an admittedly strange yet cute robotic pet, which they want to hug and play with.

The first few flatcats are available right now for the first time, and only for seven more days, on Kickstarter, the most popular crowdfunding website. The campaign is close to being fully funded, but does need a few more and decisive pledges by robot enthusiasts near and far, who like to make a difference.

The robot, designed and manufactured by Berlin based Jetpack Cognition Lab, is one of a new kind. It is entirely different from all other comparable products on the market. What makes it unique is its sensorimotor competence, the ability to feel, and react to the forces of its own motion, and those created on the outside by humans or simply by gravity.

The ability to feel forces directly in its joints allows flatcat to be curious and explore its own body and the world in the safest way possible. The technology for doing that is coming from a research field called developmental robotics, where parts of the development of animals and humans are put into software and algorithms.

Possible uses of flatcat are as a living room pet to simply play with and jointly explore the world of sensorimotor experience and motion; as a therapeutic robot to gently stimulate simple motions, provide company and comfort; or as a desktop research robot for scientists and hackers alike, by being open source, extensible and modifiable in addition to its cutting edge sensorimotor sensitivity.

Since its beginnings in 2019, Jetpack Cognition Lab is pushing radical innovations from scientific research onto the consumer market. The founders of the lab are Dr. Oswald Berthold and Matthias Kubisch. They met during their studies at Humboldt-Universität zu Berlin, and teamed up to create the weirdest and funniest robots alive.

Berthold is an Austrian artist-technologist, born in Graz, and has previously written music history with the farmersmanual collective by introducing novel styles and innovative approaches to digital music production and publishing in the internet age. Since finishing his doctorate in robotics with the Adaptive Systems Group of HU Berlin in 2018, he is busy turning fundamental research into customer value.

Kubisch is a German computer scientist, creative and activist. He has worked as an essential member of the team that created the Myon modular humanoid robot in the ALEAR project led by Dr. Manfred Hild. Also he has seen industry from the inside developing electrical power plant control algorithms. On top of being an expert on realtime adaptive algorithms and machine learning, he is an ingenious electronics designer and product visionary.

it took a while, thank you very much for your patience. No long paragraphs today. In short: The crowdfunding is open. 🌱

Now it’s your turn, hit the link below and help us build flatcats!

Your choice is simple. 1) Get one of the first limited edition flatcats and contribute with your user feedback and ideas to flatcat’s future development or 2) hold out a little longer and support us financially so we can produce flatcats in larger quantities later at a more affordable price. In return you will get a double-sided folding poster with flatcat design sketches, construction plans and high-res photos.

And as always, your feedback is very important to us.

We count on you: Now head over to the Crowdfunding page.

Best regards and see you soon on Kickstarter

Video Friday: A Blimp For Your Cat – Your weekly selection of awesome robot videos

The Flatcat Can’t Even Walk, but It’s Instantly the Creepiest Robot I’ve Ever Seen 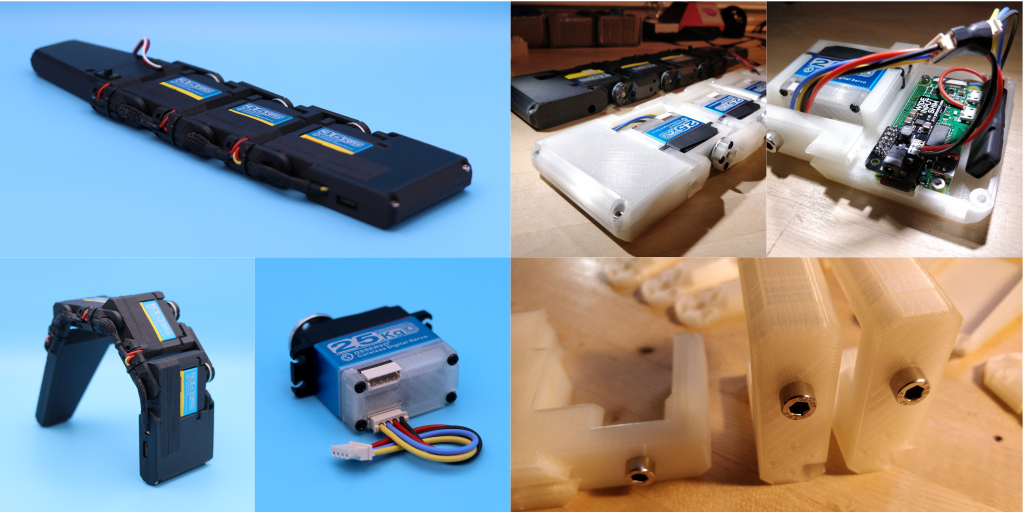 your next robot is a desktop research robot

We believe that modern robotics/AI needs a boost from the bottom, to take another two to three steps back and take the time to close the sensorimotor gap and look intensively at learning procedures before moving on to higher function such as assistance for humans.

That’s why we developed flatcat as an open, extremely simplified platform from the ground up to enable people from different scientific and research fields, as well as developers and engineers, to develop their own applications or solve research questions with a real robot. flatcat is designed to be inexpensive and highly simplified, making it accessible to many.

flatcat is open-source in hardware, firmware and software. The circuits are just as studiable and expandable as the software. The mechanics are made of 3D-printed parts and can therefore be repaired and adapted over and over again. We use readily available off-the-shelf components as much as possible to ensure parts availability. The design is modular and expandable, e. g. more joints, different motors, new controllers, more sensors etc. The mechanics is portable and lightweight, i. e. results can be presented live, mobile use is possible, etc. The motion dimension of flatcat is 2-dimensional and the reduced complexity is initially very convenient for many problems, the robot can be maintained and operated by one person, (desktop research robot).

flatcat provides a Python/C++ interface for the development of applications. The host platform is a Raspberry Pi (Zero/W) with WiFi module which drives the motors via a symmetric, i. e. insensitive data bus (RS-485, 1MBaud).

The power supply can be 6-12V, the internal battery is a 2-cell lithium polymer battery with 7.4V nominal voltage (6.6 – 8.4V, low to high). A stationary power supply can also be connected.

While preparing flatcat for release and the time before we collected and researched our peers and competition. Below is the first draft of our pet robot comparison matrix. The matrix lists several related robots on the market and shows different features on the columns.

Mobility comes to mind immediately to be added, in the meantime the top three rows are immobile robots. Prices are approximate and in USD units. The “touch+” criterion means there is a motor in the robot that can feel a force applied through touch or gravity. For this we use our in-house Sensorimotor module. More on that soon. Be in touch with any questions or comments and more things to include.

Just back from watching David Attenborough: A life on our planet.

If you haven’t, watch it. It’s on Netflix.

The movie makes a case on Biodiversity and highlights how biodiversity is connected in straightforward ways with our own health and prosperity. Remember that all of #Covid19 is itself only a part in an ongoing severe biodiversity crisis.

The view of earth shown in the picture above was not generally known to people before the late 1960s, except to a few imaginative visionaries. It is not about saving the planet though. It is about saving our own asses. Right here, right now. Anything else is procrastination, neglect, or worse. Anyway, lets not get stalled.

You ask, what does this have to do with Jetpack Cognition Lab? The answer is, just about everything. Read on to find out.

In whichever way exactly the sustainability turn is realized, there is going to be autonomous mobile robots in it.

These are likely scenarios but far from complete. Drones need support on the ground and up in the tree. They also need to go beneath the foliage because this is where it happens. That is all quite complicated stuff. The autonomous mobility of the robots we currently have is still a far cry from anything practically usable, and this includes affordable.

Mainstream promises have not realized anywhere despite trillions of sunk budgets, private and public. Remote death operations is as good as it gets.

The developments we are observing are not fast enough by some orders of magnitude. As more people need to be able to work on all that, the approach clearly needs to be massively diversified.

How is this done? You are right, with self-learning robots of course, with education and inspiration. This is a massive challenge and we need to take steps that might appear weird from the outside.

Where are you in this? We are very curious to learn and let us know anytime. Out here with the mobile Jetpack Cognition Lab and we need you support in every possible way.

flatcat is the next step towards creating robots that are built for learning all the way up. Does that scare you? good, this is how you and everyone else works, on the inside that is. Time to get to grips with yourself.

flatcat is a new robot for your home

Jetpack Cognition Lab, a Berlin-based AI and robotics startup, today announced flatcat, a new consumer robot, to be launched in March 2021. flatcat is a firm and fluffy AI pet for the living room, that responds to touch and gravity, and has a playful life of its own.

flatcat invites to experience a new dimension of touch and motion. Cuddle with it, have a gentle romp, or just watch it do weird things on its own, to caress your soul. The robot feels everything exactly with cognitive sensorimotor loops based on ten years of developmental robotics research. flatcat has no face, no app, no cloud, full privacy. It is built around a 3D printed skeleton and is powered by Jetpack Cognition Lab‘s own electrical motor design.

The new product will be available on Kickstarter and selected outlets beginning March 3, 2021. Visit https://flatcat.berlin for more information.

About Jetpack Cognition Lab
Established in 2019, Jetpack Cognition Lab is a Berlin-based AI and Robotics startup and innovation hub. Founded by Oswald Berthold and Matthias Kubisch, it specializes in science transfer and product research. The company’s bioinspired hardware and software design is built on the neuroscience and psychology of developmental learning.

Researchers find previously unknown Key Performance Indicator (KPI). This is the story of their discovery.

headway: as in the urban / relationship definition. since the planet is spherical, finite surface and so on, cannot easily quit the relationship and need to build on headway.

energy: all the funds you are using to make the headway claim plus all other resources claimed in the meantime.

For transparency we do not withhold that we propose in our own favor.

Our mission is to do everything we can to support current and upcoming generations with reusable tools and modular wisdom to grow and tend their futures at peace and prosperity.

Of course, we are beginning to learn a little in the behavioral sciences regarding how little we know about children and the educational processes. We had assumed the child to be an empty brain receptacle into which we could inject our methodically-gained wisdom until that child, too, became educated. In the light of modern behavioral science experiments that was not a good working assumption.