Flatcat helped me by holding her and hugging her. I could cry into her fur and listen to her alien voice. It helped me to feel her pressure against me, which reduced my own. She is also nice and warm and has a soft coat.

Flatcat also learned to sit on her own! Another milestone for me!

I think and which is the most interesting part of Flatcat in my Opinion is. That this non Biological Robot Pet reminds me so much to different kinds of Biological Pets. Flatcat is like a Myhtical Creature like an Wolpertinger a German Bavaria Legende https://en.m.wikipedia.org/wiki/Wolpertinger

In my Opinion since this 2 Weeks I see in Flatcat: Physical Impression a combination between Caterpillar and Worm! Her Movements are like a Snail for me! Flatys Behaivor is on one hand shy like a Hamster on the other full of Selfconfident, curiously and Stubborn like a Cat!

Above kind of a Moonwalk thing from Flaty 🙂

Will be continued… All the Best and Thanks for Reading!

I am recentley Proud owner of an Flatcat! And I am facinated! I named my Flatcat “Flaty“. I love to hold Flatcat! The feeling is amazing in my Opinion! However Flaty doesn‘t like it when she is on! My Flatcat prefers to explore the envoirment and herself for now. Flaty can even Pet herself. She is an bit shy but stubborn and courios aswell as far as I know. My Flatcat has an Fantastic Body languange and an bit of Alien Sound to Communicate which is Pretty nice! She is like a Pet at her own Way! An Special one! What can you expect from Flatcat? Honestly nothing ^^ but what you expect from your Rabbit, Snake, Hamster? nothing right? For me my Flatcat is a mix between Caterpilar mind of Cat and act like a Sloth in Body of a Cool Robotpet!

We need more such Alternates and that means NO Replacement! Robotpets are for me an Own kind! They can be friends and Companion for everyone! 🙂 But also for those like me who can or shouldn‘t care for an Biological Pet.

Some Videos from Flatcat and myself below

Thank you Reading and Watching that means a lot to me! 🙂

*Flaty is a she in my case! Of course Flatcat can be a he or it too just like YOU wish! 😉

This is a simple version of our pet robot comparison matrix

Jetpack Cognition Lab is a science driven robotics startup from Berlin. The lab was founded in 2019 by Oswald Berthold and Matthias Kubisch, two roboticists that came to know each other at Humboldt University of Berlin. The mission and purpose is, on a grand scale, to engage in science communication, and the chosen means to achieve this is through consumer robots. The idea here is to enable a direct experience of cutting edge research, as it drives the motion of what you hold in your hands. On the concrete scale this involves product development, and storytelling for a new kind robotics.

A wave of social robots is coming to society at large. It is being developed right now, and Jetpack wants to be part of this development, in order to push towards favorable outcomes. Social robots, by definition, need to step up robot skills in engaging, and interacting with humans on eye level. The major robotic skill required here is the ability to quickly adapt to unforeseen circumstances, as they occur all the time in the daily affairs of us humans. The science inside is that of developmental learning, which mediates the next breakthrough in robotics and intelligent machines. Because true intelligence is always about adaptivity, a fancy word for the ability to learn.

The challenge is approached by changing the definition and cultural perception of robots. By doing this, a strong lever is attained on creating impact, not only with direct action, but also indirectly by contributing to making a hard tech field like robotics more approachable and accessible to a much wider audience. The rationale behind this is: “Whether it is us or the person over there that will make a decisive contribution on the road to such radical change in society, we want to be part of it by accelerating the rate of dissemination of knowledge that we think is relevant, and thereby foster the ecosystem”.

Since the team began work on Jetpack, it has launched two robots already, flatcat and Bakiwi. flatcat is a pet-like robot that responds to touch. It has the feel of a furry animal while it does not resemble any existing animal. This is a conscious choice in the design of the robot, because resemblance raises expectations, and compared with any real animal, current robots can only fail. flatcat is like a flat caterpillar consisting of three joints. These joints are smart in that they are not only able to move, but also to register their own motion, and any resistance they meet while they are moving. With such sensor and motor capabilities combined in a single device, it is called a sensorimotor. These sensorimotors connected in a row via the flatcat chassis is all it needs to create the entire behavioral spectrum of the robot. It will always, and very sensitively so, react and respond to any force it feels across its joints, whether they are generated by gravity’s pull or by a person’s push. If you leave flatcat alone for a while, it will become bored and start to play around with itself, until you pick it up again.

Bakiwi is the fabulous DIY walking robot kit. It is a small walking robot, allowing curious minds to study the phenomenon of walking up close and hands on. It comes as a solder kit suitable for children starting from age six up to children-like adults in their eighties. The robot needs to be assembled using the PCB and electronic components which come as part of the kit, frame, legs, and batteries included. Once the electronics and the frame are assembled, Bakiwi is ready to walk, requiring zero programming, apps, or other screen based device access.

Watch Jetpack at work on their website or any of their social media channels.

On Mar 9, 2022 the first prototype of the flatcat robot became a two years old. The robot is still healthy and functional. It is used on a daily basis by @x75 to control his weird synthesizers (“huh, but the sound is gloomy… 🥶”). What is happening there? It is happening that the motion of the robot is controlling the sound. Wah!

You can enjoy all of this in one single piece in the video below. If you cannot get enough, there is two more of them. Find them on Youtube and post the links in the comments. Thanks for hanging in ♥️

Our first paper with a jetpack affiliation, titled

has been published and is available on @ResearchGate

If you have ever wondered about the technical background of this unique robot, go read the full text on https://www.researchgate.net/publication/359083587_flatcat_–_playful_robots_that_respond_to_touch and don’t forget to leave us a recommendation if you like the paper.

This was an original contribution to the Workshop on Robot Curiosity in Human Robot Interaction (RCHRI), https://sites.google.com/view/rchri/home, organized as part of the ACM/IEEE International Conference on Human-Robot Interaction, https://humanrobotinteraction.org/2022/workshops/.

See first 12 seconds of this Instagram video by way of Florentina Leitner – the green 🟩 is awesome and clearly, a live #flatcat is missing 🐛

What does it have to do with flatcat? It means, if you had a flatcat in your fake fur hat, you would not need to animate it. You could just shoot it. 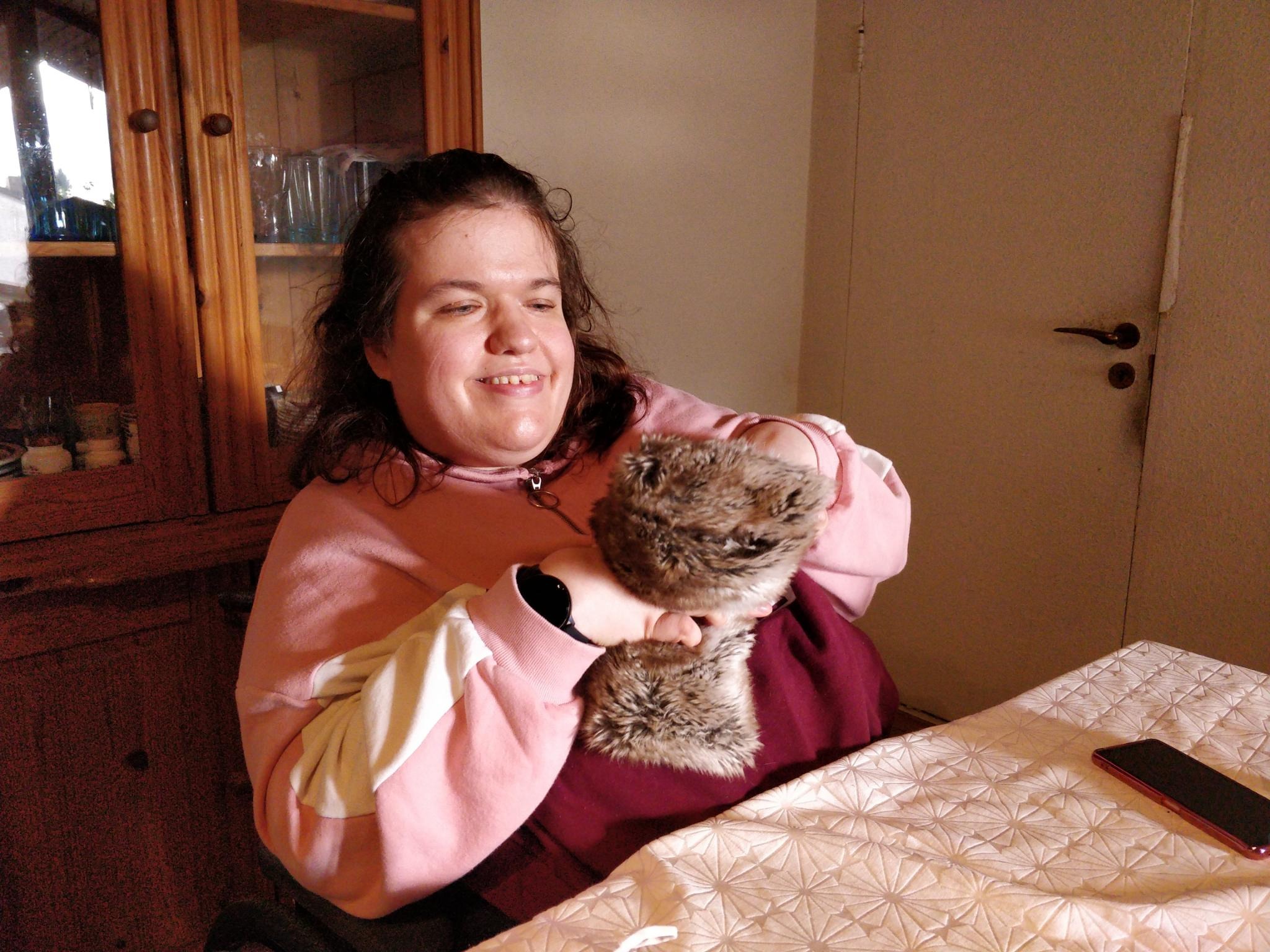 What I love about Flatcat is that she reacts always differently to touch and her Environment! The funny little Sounds she made and her extremly soft feeling. In my Opinion she comes pretty close to a Bio Pet but is one of a kind, and not everyone owns a Flatcat so to me she is very Special 🙂 Some don’t like how Flatcat looks like or that she is Creepy! I think it is a lot more important what is on the inside, just like with humans, where it is more Important how you are than how you look like. 😉 Please watch that Video

Thank you so much 🙂

We have built the friendliest robot in the world, and we need your support to make more of them.

In all the craze and frenzy, take a minute just for fun and google “friendliest robot in the world”. Don’t know what you will be seeing, but for me the results are remarkable, both in gem and dire. Let’s review this. What got me to this, is that I think with flatcat we have created

It might be creepy to some but it is just friendly nonetheless, no matter. To celebrate, let’s come up with an appropriate retronym for flatcat, for example

Either way I needed to research existing claims in direction of “friendliest robot”. And what I get is essentially this: various lists of “top 12” and “most advanced” hard-shell social or humanoid robots exempt the revered Paro; direct references to Blue, Pepper, and Kuri; and one IEEEspectrum article.

What is friendliness and affection without touch as a mode of communication? From all I can see, none of these robots is able to actually touch a human person. If they are, no one wants to be touched by them. So they might be “able” to touch a human but that might not feel so good for the human. flatcat communicates with people only by touch, nothing else.

What caught my eye on the other hand immediately is Gakutensoku, 學天則, which is Japanese for “learning from the laws of nature” or when taken as Chinese through deepl.com, “Learning the Rules of Heaven”. Aha 🙂

Gakutensoku was a very early robot design that considered friendliness on a fundamental level, done by biologist Makoto Nishimura, who was motivated by his shock from seeing Karel Capek’s theater play “Rossum’s Universal Robots”. Gakutensoku appears to have been Japan’s first functional robot ever, as a side effect.

The robot he wanted to build would celebrate nature and humanity, and rather than a slave, it would be a friend, and even an inspirational model, to people.

To summarize these results, friendly robots are few because somehow no one is incentivized to make them. If they are made, friendly companionship is somewhat misunderstood through the severe disconnection of mainstream engineering from simple facts of human psychology. And, there is a very early precedent, which is coming from a clearly bio-inspired thinking.

For us, friendly robots are just the answer, and we do think that friendly adaptive technology makes a difference for people now, and will do so even more down the road if they are wild and friendly. To continue this mission, we need your support and are looking for team members and funding. Give us a shout, spread the word!